Economic Bulletin №3. Foreign Investments in the Kaliningrad Region: Diagnostics of Status, Support Measures and Impact on the Investment Environment in the Region" (ENG, RUS) 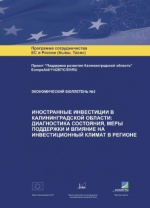 In today’s world, foreign investments are an efficient way of expansion of export potential and involvement of national manufacturers in the system of international economic relations. Therefore, in conditions of the Kaliningrad Region, where future economic development is currently a subject of violent polemics, foreign investments acquire special importance.

Despite the relatively high rate of the Kaliningrad region’s economy and the positive dynamics of investments, the level of foreign investors activities is obviously inadequate to the Kaliningrad Region development interests. In this context, the search of ways to settle the problems, encumbering expansion of foreign investments in the region’s economy, have become a priority. Even though Russian and foreign investors are similar in many respects, some of them are of a specific nature, given the conditions for activities of foreign companies in Russia. The special features are:

On this background, it is extremely important that the Federal legislation – followed by the regional legislation – have not created equal opportunities for Russian and foreign investors and do not make any difference between them, thereby neglecting the need to create special incentives, to improve the region’s attractiveness, and encourage foreign investments. Such approach is customary and comprehensible to European and probably to other Russian regions, however, taking into consideration the “non-standard” objectives, facing Kaliningrad economy, it cannot be laid in the foundation of regional investment policy.

Many studies were dedicated to exploration and solution of investors’ problems in Russia during the recent years. The goal of our work is not a revision of the previous studies, but an analysis of changes to the conditions for foreign investors’ activities in the Kaliningrad Region, which have taken place in the recent times. In this work, the authors make an attempt to reveal the main trends in the development of foreign investments, to identify the ‘bottlenecks’ and key problems (both those remaining from the past and newly emerging) relating to the activities of foreign investors in the territory of the Kaliningrad Region. On this basis, proposals are made on the ways to overcome the problems and the forms of assistance to the process of intensification of investment activities, which the EUROPEAID Project and the Regional Economic Development Agency (RDA) in the Kaliningrad Region could provide.

This Bulletin is prepared by the experts of the European Commission Project EUROPEAID/114287/С/SV/RU “Support for Regional Development of Kaliningrad” and of the RDA: M. Belonogova, A. Vialkin, A. Yershov , S. Klessova, A. Usanov , and A. Kharin.

Economic Bulletin №2. Development of Export in the Kaliningrad Region (ENG, RUS)
Authors: S. Klessova, A. Yershov, A. Usanov, A. Kharin
A collection of articles prepared in the framework of "Combating Unemployment Among Youth" project
Authors: A group of authors
Economic Bulletin №4. Regional policy in the border districts of Poland and Lithuania: aims, tools and experiences for Kaliningrad region (ENG, RUS)
Authors: G. Bunatian, A. Vialkin, A. Yershov , S. Klessova
see other publications