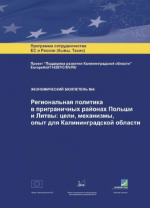 The work “Regional policy in the border districts of Poland and Lithuania: aims, tools and experiences for Kaliningrad region” which is offered for your attention is a continuation of the series “Economic bulletins” being issued within the framework of one of the areas of joint activities of the fund “Regional Development Agency” (Kaliningrad) and the project funded by the European Commission EUROPEAID/114287/C/SV/RU “Support to the Kaliningrad Regional Development”.

The work is addressed to a wide range of experts and provides them with information on problems of social and economic development of Polish and Lithuanian districts bordering the Kaliningrad region, as well as on the aims and tools of the regional policy of these countries after their joining the European Union. Comprehensive investigation is trying to achieve a double aim: first, to attract attention to those changes in Polish and Lithuanian border districts which are able to produce either positive or negative effects on Kaliningrad region; second, to find out those elements of the regional policy in the neighbouring countries which might be used or taken into consideration in Russia. In the limited framework of this paper the authors did not attempt to cover the whole range of the relative problems, but to focus more on those issues and tendencies which are not so far well known by the Russian reader.