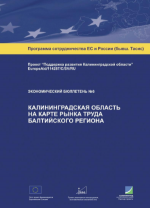 Kaliningrad region is one of the smallest regions of the Russian Federation. After declaration of independence by former USSR Baltic republics it represents a Russian enclave by the Baltic Sea. It is situated between Lithuania and Poland which together with other 6 Central European countries, Cyprus and Malta joined the EU in May, 2004, so Kaliningrad region faces both negative and positive influence of its geographical position on economy. Because of its geographical position, Kaliningrad region is influenced by the factors which define economic development of the Baltic region (and to some extent of the EU as a whole), but at the same time it remains institutionally connected and dependent on the Russian Federation.

Researches carried out and aimed at the defining of problems and possibilities resulting from specific features of Kaliningrad region show that it must follow development of regional factors and at the same time base on the advantages given by the specific geopolitical position. The region must develop openness to its neighbours and the EU, make initiatives on the RF level, being innovative both from the point of view of policy development and its economic development by the development of initiatives on the regional level.

Analysis of the requirements fulfillment of which will contribute to the development of sound and competitive labor market is represented in the bulletin, possible initiatives on perfection of local labor resources in relation to the regional economy requirements are shown.

The bulletin is prepared by the experts of the European mission project EUROPEAID/114287/С/SV/RU «Support for the Kaliningrad region development» and the Regional Development Agency G.Bunatian, N.Makova, V.Panteleev, A.Kharin.

Kaliningrad after the 2018 World Football Cup: What next?
Authors: Aleksei Ignatev
A collection of articles prepared in the framework of "Combating Unemployment Among Youth" project
Authors: A group of authors
Economic Bulletin №5. Competitiveness of enterprises in Kaliningrad region: Analysis of macro- and micro-economic factors (ENG, RUS)
Authors: G. Bunatian, A. Vialkin, A. Yershov , S. Klessova, A. Usanov , and A. Kharin
see other publications