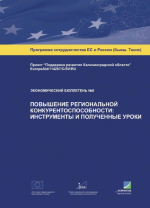 Nowadays, the problem of enhancement of competitiveness of the Kaliningrad economy is taking a central place among the issues of region’s development in connection with an increasing integration of the Russian economy into the system of world economic relations. The Kaliningrad region’s advantageous geographic location towards Russia’s major trade partner – the European Union, region’s well-developed transport infrastructure, relative cheapness of labour force and, of course, preferences of the Special Economic Zone have been the factors determining development of the region’s current economic specialisation. However, in light of inevitable changes of conditions of economic activity, which are already taking place (EU enlargement and related growth of isolation of the region from the mainland Russia, forthcoming Russia’s joining the WTO) it becomes obvious that further economic development of the region is impossible without a radical enhancement of competitiveness of Kaliningrad enterprises. The key to solving this problem relates to identification of main reasons for a low competitiveness of Kaliningrad enterprises as compared to similar indicators of foreign and Russian companies.

The present bulletin summarises views and opinions of participants voiced at the conference. It contains practical recommendations and proposals aimed to support Kaliningrad companies and the region as a w hole in enhancing their competitiveness. As a separate section of the bulletin, one may find success stories of organisation of activity of development agencies abroad and a long-term master plan for the Kaliningrad Regional Development Agency proposed on the basis of summarising their experience.

The bulletin is prepared by European Commission experts of the EuropeAid/ 114287/C/SV/RU project “Support for regional development of Kaliningrad” and of the “Regional Economic Development Agency”. Authors of the Bulletin sections are A. Bonstra (Netherlands), S. Brazinskas (Lithuania), G. Bunatyan, V.I. Panteleyev, and A.G. Kharin.