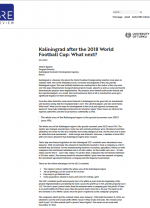 Kaliningrad is a Russian city where the World Football Championship matches took place in summer 2018. This event stimulated socio-economic development of the city and the Kaliningrad region. The new football stadium was constructed in the center of the city. More over the large infrastructure transportation projects (roads, airport) as well as social and tourist infrastructure projects were implemented. The projects were funded both by the federal and the regional budgets. As a result, the local businesses (first of all in construction area) got a significant impulse for their development.

Economic Bulletin №2. Development of Export in the Kaliningrad Region (ENG, RUS)
Authors: S. Klessova, A. Yershov, A. Usanov, A. Kharin
A collection of articles prepared in the framework of "Combating Unemployment Among Youth" project
Authors: A group of authors
Economic Bulletin №5. Competitiveness of enterprises in Kaliningrad region: Analysis of macro- and micro-economic factors (ENG, RUS)
Authors: G. Bunatian, A. Vialkin, A. Yershov , S. Klessova, A. Usanov , and A. Kharin
see other publications